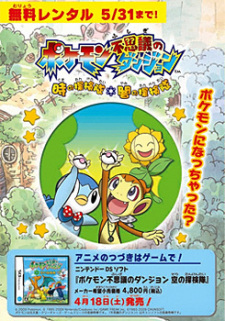 Plot Summary: In a world where only Pokémon live, one Hikozaru wishes to be part of Pukurin Guild—a large area where Exploration Teams gather and work. Intimidated by the apparent strength of the guild members and the guild's security, Hikozaru runs away, stumbling over an unconscious Pochama in the middle of his escape. The Pochama wakes up and is immediately shocked by both a talking Hikozaru as well as his own appearance—because Pochama knows that he is actually a human! With Pochama having no memories aside from previously being human (as well as countless questions about his new body), Hikozaru suggests that he ask the leader of Pukurin Guild for help. While Guildmaster Pukurin may not have answers about Pochama's transformation, he decides to make Pochama and Hikozaru an Exploration Team, which HIkozaru calls Pokédans. For their first mission, the duo must get a Gabite Scale by going to Labyrinth Cave with Kimawari!