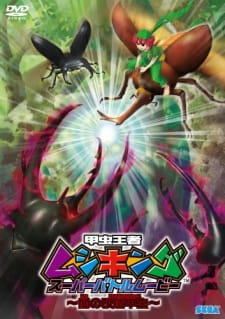 Plot Summary: A shadow of Darkness approaches a peaceful Forest... Sounds like trouble for Mushiking! Lets put our strengths together and fight Adder! Deep in the Forest exists a paradise for the fairies and insects. There, Popo the Fairy, Mushiking, The King of Beetles, and many other beetles live happily together. One day, a happy-go-lucky beetle named Iron Stripe Stag-Beetle (Iron Stripe) from another forest appears in front of Popo, requesting a challenge with Mushiking in a combat. Suddenly, Iron Stripe and Popo are attacked by a red-eyed beetle, Blue Hercules Beetle, who is being controlled by Adder, the Fairy of Darkness scheming to rule the Forest. Mushiking, The King of Beetles, rushes to the rescue, but with Giraffe Stag-beetle (Giraffe), also controlled by Adder, showing up, he has to battle two giant beetles as he defends Popo and friends, and gradually losing strength, gets captured and is taken away.