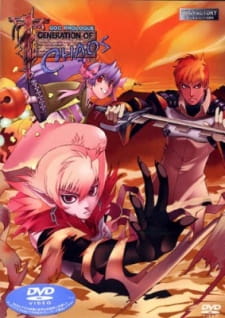 Plot Summary: In the world of Neverland, humans and monsters live alongside each other. Generation of Chaos details the start of the adventures of the two heroes of Neverland, Chiffon and Roze. Departure of Chiffon Chiffon is a boy with the power to train monsters. After realizing that his power is waning, he sets out to Hiyoko Forest to return his Hiyokomushi—a fish-like mount and companion—back to its homeland, the Hiyoko Forest. However, the journey there is anything but uneventful as his control over his monster gradually loosens. Roze's Decision Roze is of half-demon descent, living a quiet life among humans with her sister Emilia. One day, as Roze returns from work, she sees her house being set on fire.The destruction of her home shatters her dream of being able to live peacefully with humankind, as she is reminded that harmony between demons and humans is far from becoming a reality.