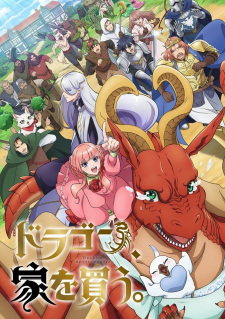 Plot Summary: In an RPG fantasy world, a red dragon named Letty is disowned by his parents after failing to guard their eggs. Now he has to find a place of his own, but unlike other dragons, Letty is meek, cowardly, and has overall low stats. Regardless, a defenseless young dragon makes for an easy target for those who only see him as a beast to be feared, vanquished, and even devoured. After some time searching for somewhere to call "home," he encounters the elf Dearia, who saves him from a band of heroes. Both an architect and a real estate agent, Dearia offers to help Letty find the perfect abode that suits his needs. Thus ensues Letty's house-hunting quest, as well as all the fantastical creatures and formidable enemies he meets along the way!