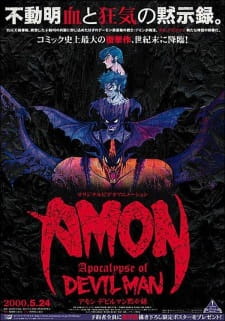 Plot Summary: Fear runs rampant throughout Tokyo with the revelation that demons in fact exist amongst us. Paranoia and the darker side of humanity boils onto the streets as people turn on one another, suspecting that anyone could in fact be a demon hiding in human clothing. Amidst the growing tensions, tragedy strikes Akira causing his mind to snap, retreating into his subconscious, allowing his Devilish alter-ego Amon to break free from Akira's cage of flesh and wreak havoc on both human and demons alike.

Other name: Amon: The Apocalypse of Devilman; AMON デビルマン黙示録